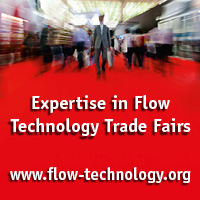 VALVE WORLD EXPO 2020 in Düsseldorf: LNG floats on a wave of success

ecoMetals-trails will happen for the first time 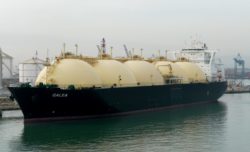 LNG is floating on a wave of success – here by tanker.

LNG provides movement in the energy market. Ever more freighters, cruise ships and even trucks run on liquid natural gas. There are also always valves on board. And LNG also contributes to uninterrupted energy supply in industry and households.

LNG also reaches targets that would be made uneconomical by the construction of a pipeline. Its logistic flexibility makes it unique – and attractive – for the natural gas sector. According to the global LNG Outlook by Shell, the demand for liquefied natural gas increased last year by 29 million tons, or 11%, to 293 million tons.

And the steep increase in LNG continues. Over the next 20 years we expect an increase in demand of more than double each year. “In North America, Europe and Asia, LNG will occupy an ever-increasing proportion of the supply for covering the increasing demand up to 2030 and beyond,” explains Exxon Mobil.

LNG is a decisive link
Because LNG has developed from a point-to-point niche business in a few regional markets to a large and growing industry that offers reliable supply worldwide. “Liquid natural gas is the decisive link between the natural gas supplier and the natural gas customer, that are geographically wide apart,” explains Exxon Mobil. LNG benefit...

Metso valves are provided for floating LNG, for example. The company offers modular valves, such as on, off, safety and regulation valves for LNG production. The LNG product range includes emergency shut-off, drain, and drier sequencing valves and flow regulation applications. According to Metso, the main challenges include restricted space and weight restrictions in the processing, storage and unloading of shipboard installations.  In addition, the system must be vibration-resistant.

Long-haul with LNG
Bestobell Valves, a British manufacturer of cryonic valves, is also active in the LNG sector. The company’s product range includes, for example, fire-tested LNG shut-off valves that are suitable for smaller and medium-sized dispensing systems.

One aspect of LNG is the transport, the other being the use of liquid natural gas as a drive fuel. LNG is already driving a few tankers and freighters. And also, cruise ships by now. The new ship AIDAnova is already making its journeys using liquid natural gas. The new Nova model is setting new standards: The ship will be conveying around 2,600 cabins, a climbing crag, giant water-slides, a Beach Club and a large-scale mini-golf range over the waves.

300 valves on board
Almost 300 Herose valves are used on board the AIDAnova. They are used for the storage and bunkering of the cruise liner. In the storage of LNG on board, the valves carry out the task of monitoring the LNG and feeding it safely to the drive system. Safety valves protect the system from prohibited over-pressure.

“The Herose valves are the foremost and most important valve in the charging processes, or bunkering processes,” says Marketing Chief Mario Esche. These valves are designated as ESD (Emergency Shut down) valves and fulfil the task of interrupting the bunkering process immediately in an emergency. ESD valves are pneumatically-driven shut-off valves that close in the shortest possible time by using spring force. 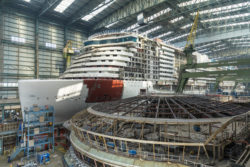 The AIDAnova under construction. The cruise ship will be going on its maiden journey in December. Photo: AIDA Cruises

Special sealing
On the Aida, the valves are used immediately at the storage tank in the Coldbox, in the bunkering lines and in the Fuel Gas Supply System (FGSS). This includes fire safety shut-off valves as manual and powered variants, regulating valves, non-return valves, locking non-return valves and safety valves.

These applications are not usual or simple for the valves because the entire gas supply system must operate without leaks. “Because, if gas were to escape, this would be a hazard for the crew and the passengers. For this reason, the requirements for sealing of the valves are particularly stringent,” explains Mario Esche. The tightness to the outside is ensured in the Herose factory by a hundred-percent test regime. “In addition, DIN EN ISO 10497 states that valves for LNG applications must remain functional for a period of at least 30 minutes at up to 1000°C in the event of a fire”.

In general, the valves need to comply with the requirements of the classification companies. These include material and strength analyses during the cast material manufacture, tests that accompany the product under extremely low temperatures and function and leak tests during assembly. “In addition, the materials are selected for their corrosion-resistance with regard to salty, aggressive sea-air and their fire-resistance in accordance with DIN EN ISO 10497,” says Mario Esche.

Launching with powerful symbolism
The AIDAnova is now gathering speed. A ship of the same construction is due to be launched in 2021. Developments that certainly have powerful symbolism. “When other ocean carriers see that AIDA can be supplied with LNG in ports, and that it can remain at sea with this supply for 14 days or more, they will perhaps overcome their reticence,” speculates Bernhard Meyer, one of the Managing Directors of the Meyer shipyard.

LNG on a successful course – a development that has long been no surprise to Herose. The company has supplied valves solutions for more than 70 ships and more than 50 land-based installations. For example, for cruise liners, ferries, freighters and river boats as well as harbour tugs and harbour dredgers. Land installations, including import terminals, liquefaction plant and evaporation installations and truck loading stations have been successfully equipped with valves.

The increasing goods traffic on road and water will come even more in focus over the next few years. The use of fossil fuels is associated with an increase in CO2 emissions – at the cost of climate and environment. “The introduction of LNG as an alternative fuel for heavy goods traffic would mean that there would be no more fine dust and sulphur dioxide emission, that there would be 80 to 90 percent less nitrogen dioxide in the air and that the CO2 emission would be reduced by 10 to 20 percent,” according to the promotional programme of the EU, INTERREG Deutschland Nederland.

Alternative fuel
Programmes such as the INTERREG are intended to promote the development. The “LNG Pilots” project was initiated to drive forward and accelerate the introduction of LNG as an alternative fuel in trans-border goods transport. The project is intended, amongst other things, to carry out analyses for trimodal infrastructure – heavy commercial goods / trucks, river boats, industrial applications – in ports and to investigate the possibilities of bio-gas use. “In addition, logistics concepts for the neighbouring countries of Lower Saxony and the Netherlands are to be developed and technical innovations in the field of tank charging are to be developed further. In the end, the possibilities for LNG charging stations and storage facilities will be optimised by the application of innovations,” according to the project description.  Things are also happening in the field of public LNG promotion: The planned costs for the INTERREG project, that will be ending in June 2019, after three and a half years, will be around 6.75 million Euros.

It is therefore appropriate that the first LNG charging station has now been opened by Shell in Germany. “This is a signal for the change in goods road traffic,” says Andreas Kuhlmann, Chairman of the Management Board of the German Energy Agency (dena).  Previously there were only two LNG charging stations in Germany. In order to establish LNG as a fuel, dena has been working in the task force with various stakeholders for three years. A development that is naturally being carefully monitored by some valve manufacturers.

The use of LNG seems to be unlimited. This year, Scania will be launching an LNG-powered coach. The model is intended to have a range of up to 1,000 kilometres.

USA is massively exporting LNG
No question, more and more LNG projects are sprouting up out of the ground all over the world. Above all, the USA is massively involved in the export of LNG, as demonstrated over the past two years. The LNG capacity in America will be increasing considerably once more with the construction of five new terminals next year. Experts speculate that the USA could increase its export capacity in the next few years to around 110 billion cubic metres. Europe will be one of the important markets.

Russia is also discovering LNG as a promising primary energy carrier, even though the country does not yet count as one of the biggest providers of liquid natural gas. One supplier is the energy company Novatec, whose focus is less on the European market, however, and more on the Asian market. “Jamal LNG” has started production, for example. However, the project produces a modest volume of 5.5 million tons annually for the energy market. It is, however, the first LNG terminal north of the Arctic Circle. Where, again, LNG is a pioneer.

Additional products will follow in Russia, such as “Arctic LNG 2”, which will be starting in 2023, and, when fully operational will produce 18 million tons of LNG for the market.

Building the LNG infrastructure
The LNG sector has grown considerably, particularly in the past few years. Component manufacturers, such as valve manufacturers and plant providers can celebrate full order books. The Linde Group offers technologies and complete solutions both for LNG transport and for the creation of an LNG infrastructure.  The products range “from cleaning the natural gas, via storage tanks and evaporation plant for port installations and ships to regional distribution and customer applications,” according to the company.

The potential of LNG can also be seen from the fact that: Natural gas, with its proportion of around 30 percent of the world energy market, is one of the most important energy carriers in the world and potentially causes the least air pollution.  Even if the gas is primarily supplied via lines and pipelines to the user, LNG is playing an ever-increasing role. A development that could in future made itself felt in Germany as well. For example, by the LNG terminal in Brunsbüttel:  The final investment decision is due to be made in 2019, and commissioning could be as early as 2022.

New LNG ships
LNG will maintain a successful course. In real terms, also to the joy of valve manufacturers such as Herose. “At the moment we are receiving regular orders for new ships with LNG drive power,” says Mario Esche, Marketing Manager at Herose. This includes a large number of cruise ships and ferries. LNG provides lots of power – safely.

From 1 to 3 December 2020, Düsseldorf's VALVE WORLD EXPO, the number one trade fair in the industry, will show the entire range of industrial valves and fittings. Accompanied by an international conference and various specialist forums, the international fittings industry will then meet at Düsseldorf Fairgrounds.